Milan will play against Cagliari in Serie A and we got a Football forecast that win for the match. The game is on Saturday, August 1 from 19:45 UK at Stadio Giuseppe Meazza. 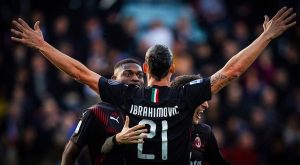 Milan is in 6th place with 63 points after 37 matches. That is the place that the club will finish because AS Roma has 4 more points than them but Napoli is with 4 fewer points than them. However, after the resuming of the football, the team is unbeaten in 12 games. It will be a great achievement if they finished without a loss and because of that, I expect them to be motivated. In their last 5 clashes in Serie A, Zlatan Ibrahimovic and his teammates won 4 of them. The only match that they didn’t win was against Atalanta 1:1. Their last game was away from home against Sampdoria but that didn’t stop them to scored 4 goals and win 1:4. Ibrahimovic scored 2 of these goals.

Cagliari is in 13th place with 45 points after 37 games in Serie A. The three teams ahead of the team are with only one more point than them. The form of the club after the pandemic break is awful. In their first 11 clashes, Cagliari won only two of them and that is the reason that they are far away from the European spots in the standing. For example, they lost in their last 3 games in the championship from Sampdoria 3:0, Lazio 2:1, and Udinese 0:1. Their last match was a victory at home against Juventus 2:0 but Juve already won the title and they didn’t play at their best.

The home team is the favorite in the upcoming match. I think that Milan will play for a victory like they did in all their clashes after the resuming of the football. Cagliari’s form is awful and the victory against Juventus can’t change that. Because of that, I expect a win for Rossoneri. Football forecast that win: Milan to win