Inter will play against Shakhtar Donetsk in Europa League and we got a Football forecast for the match. The game is on Monday, August 17 from 20:00 UK at Merkur Spiel-Arena. 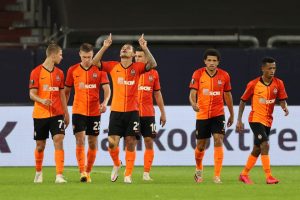 Inter have the chance to finish this season with a trophy. Of course, that can happen if the team of Antonio Conte wins Europa League. To make it to the top 4 in the tournament Inter first eliminated the Bulgarian team Ludogorets after two victories – 0:2 in Bulgaria and with 2:1 in Milano. Those matches were back in February and their next opponent in August was Getafe. The team from Italy was the favorite and won without any trouble with 2:0 after goals from Lukaku and Eriksen.

Antonio Conte’s team was again in the role of a favorite against Bayer Leverkusen in the ¼ finals and beat them a little harder with 2:1. Nicolo Barella and Romelu Lukaku scored in the first 21 minutes of the clash but Kai Havertz scored for Leverkusen in the 24th minute. However, the German team didn’t find a way to score again and was eliminated.

Shakhtar Donetsk faced Benfica in the 1/16 finals of the Europa League. The Ukrainian team was the underdog against their Portuguese opponent but won the first clash at home with 2:1. The second leg which was played in Portugal finished a draw 3:3 and this way the victory with only one goal difference from the first leg was enough for them. The next club that Donetsk faced was Wolfsburg.

The first leg was played in March in Germany and very surprisingly the away team win it 1:2. The second leg against the Wolves was played 10 days ago and Shakhtar won it 3:0. However, everyone thought that the clash will finish without goals when the team from Ukraine scored 3 times in the last minutes of the match. Their opponent in the ¼ finals was Basel and Shakhtar Donetsk won with 4:1.

Inter is the favorite in the upcoming ½ final from Europa League but we can’t write off Shakhtar Donetsk which already showed us that they can eliminate any team. I expect a show from both teams and to see goals from them. Football forecast: BTTS